I know that you will change all the episodes when the BDs are released but still I think sticking with one source is still better.

and if I remember correctly, before, Hi10 releases episodes with best subs even though the fansubs from a certain group was released late.


this is just my opinion 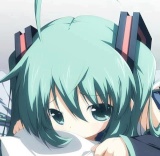